Why Whateley may be right; and an Ashes Test team – four years from now

This morning on ABC1’s Offsiders, Gerard Whateley made some comments on the need for generational change in the Australian Test team.

This coming Ashes test series isn’t going to be a doddle, it’s going to be tough. And while we can reasonably expect not to play in India as well as we may at home, the fact is that the team is carrying some players; the team needs regeneration as we look post-Ashes; and there are blokes waiting, scoring runs, ready.

If you’re not prepared to make changes in a losing team when are you?

We are not winning tests, folks. The Poms are coming. Something’s gotta change.

We all recognise that change is tough at the best of times; but the fact is that we’re losing. We’re not number 1 – in fact we’re far from it! So, this means you either stick with the blokes and hope; or you bite the bullet, and move on. We won’t know if the likes of Ferguson, Bailey and Smith can perform under sustained Test match pressure over time unless we’re getting them in, playing, and now.

Our middle order is suspect. And had Marcus North not got his century in India, one would trust that the selectors would have dropped him. Now it could be too late and we may have the situation, as Gerard put so decisively today, that if we get beaten in the Gabba test, “it’ll be on” to quote Gerard.

His argument though – and it’s one that we need to step back and consider – is why the selectors didn’t act when they had the opportunity 18 months ago – or even since then – and brought new players in.

I hope fervently we are not going to rue the lack of decisiveness as we reflect back upon this Ashes series after it’s all over. I regret, however, that we may.

Irvine’s Australian XI (if I was picking them now):

And because I love looking to the future, notwithstanding when it will be – here’s some ideas for a future Ashes test team four years from now:

This is a very long-term crystal selection ball – but let’s look at who’s likely to be playing in four summers from now in the current top six batsmen. Only one – Clarke. Maybe. Paine takes over from Haddin. He’s shown his mettle. For the bowlers, I’ve gone to the Australian Under 19 team and picked from them. The Australian selectors have shown their belief in the long-term of Hazelwood and James Pattinson, so let’s keep the faith. Stephen O’Keefe is my tip even a long way out as as a spinner, and Alister McDermott has my tip as a romantic-cricket-tragic-selector. The batting order from Paine down is irrelevant – it’s the names that are important.

And so to the batsmen. I’m a BIG Phil Hughes fan and I think he deserves a go at the highest level. George Bailey will become an opener (like Boonie did, and Watson more recently), so there’s precedent. He’s future captain material. And he goes in. Khawaja at first drop, followed by Ferguson, Mitchell Marsh and then Smith. By then, it’ll be a mix of youthfulness and vigour.

Australia needs to start planning for a team like this now – not at the end of this summer. I hope the selectors look to the future. It’s part of their role to rejuvenate, plan, and bring in the new blokes. Change happens. We loved Boonie, but his day, like Swampy’s, and Tubby’s and Merv’s came. Some got the tap, some saw it coming.

Change can be framed by the Australian selectors, or it can be forced upon them. We’ll only thank them – rightly – if it’s the former.

PrevPreviousGuts: Jesse Martin
NextTwitter – just a modern-day town square. Or whatever you think it is.Next 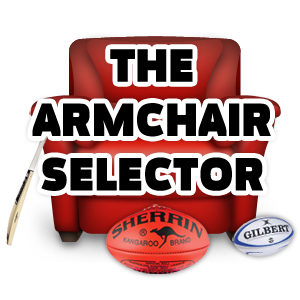 Such are the prognostications of armchair selectors, four years ago I boldly predicted the starting XI of the Australian test team for this test summer

With the Ashes now being retained by England, we look to the long-term, the big picture. Three down, seven to go. For me, still, what’s